What a Coincidence: Unison Tuning – by Mike Overly 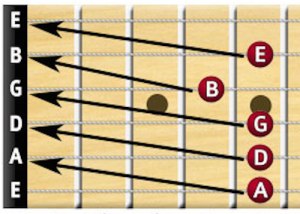 Music, whether it is seen or heard, has three fundamental parts: rhythm, pitch and dynamics. Each of these parts may be studied in great detail, but for this lesson, let’s simply define them as follows: rhythm is time, pitch is a sound that has a letter name, and dynamics is the degree of sound volume from quiet to loud. That all sounds simple enough, but what is sound?

Let’s look at frequency more closely. The music we hear, in contrast to the silent music symbols we read, is the sound of air moving. This then begs the question, what is moving the air? On the guitar, it’s the strings that move the air. When you pick or pluck a guitar string it oscillates back and forth. It is these back and forth string motions, or vibrations, that are moving the air. These vibrations may be counted and then assigned a frequency number. We’ll skip over all the deep physics and acoustics data, like resonating bodies, air-pressure and amplitude, and instead, we’ll focus on frequency so that you may tune your guitar.

The speed of a string vibrating back and forth is steady, regular and predictable in time. The number of times a string oscillates in one second is called frequency. Frequency is measured as cycles per second (cps) which is also known as Hertz (Hz), named after the 19th century German physicist Heinrich Hertz. The frequency range of the human ear is approximately 20 Hz to 20,000 Hz. This may be written as 20 Hz to 20 kHz. Kilo (k) is the Greek prefix for thousand, 1 kHz = 1000 Hz. The question then becomes, how many times does a string move back and forth in one second? The answer to that question depends upon which string and fret is being played.

Any string played at any fret vibrates faster than the human eye can see and count. So, science has to count for us ~ think electronic tuner. Not only are the vibrations counted and given a frequency number, but they may also be assigned a letter, scale degree tone number, and a note location on the staff. For example, string 5 at fret zero vibrates 110 times a second (110 Hz) and is called A (A). On the guitar, Fret Zero is also known as the nut or open.

It helps if we consider pitch as being Absolute, Perfect or Relative.

Absolute Pitch is an external reference to a definite pitch of a specific frequency upon which everyone agrees. Absolute Pitch may be assigned a letter, scale degree tone number, harmony numeral, or staff note. Here are a few good sources of Absolute Pitch: a tuning fork, an electronic tuner, and a “tune-up pitch” from a play-along CD. Remember, audio tapes are not a good source of Absolute Pitch due to the varying playback speeds of different tape players. Here’s something interesting. The International Agreement, which made A = 440 Hz the Absolute Reference Pitch for the entire world, wasn’t agreed upon until 1939!

Perfect Pitch is the ability of a person to identify a given musical pitch without the benefit of an external Absolute Pitch reference. Those who have Perfect Pitch exhibit some or all of the following capabilities: identify individual pitches by name when played on various instruments; name the key letter of a given piece of tonal music just by listening without reference to an external Absolute Pitch; identify and name all the tones of a given chord or tone cluster; accurately sing any given pitch without an external Absolute Pitch reference; and name the pitches of common everyday sounds such as the honk of a car horn, the ring of a telephone, the chime of a doorbell, or the hum of a refrigerator. Many believe that you must be born with Perfect Pitch because it seems as though it can’t be learned. In contrast to Perfect Pitch, Relative Pitch can be learned.

Uni means one and sonus means sound, so, unison means one sound. Said a different way, in Latin uni means one and in Greek iso also means one, therefore, uni + iso(n) = unison. In other words, unison means more than one as one. No matter how we define it, unison is really a coincidence, that is, multiple events occurring at the same time. The prefix “co” means together (two or more as one), and an “incident” is an event. With this said, unison may be further defined to mean: two tones of the same pitch sounding at the same time. One of the greatest things about the guitar is that by playing the same pitch, on two or more different strings of the same guitar at the same time, unison is possible. On the piano, woodwinds, brass and voice, unison is impossible!

From an Absolute Pitch source, determine the reference pitch. For example, if you want to tune string 6, you’ll need to hear the Absolute Pitch of E = 82.41 Hz. Here’s something important. Be sure to use a tuning fork, or some other source of Absolute Pitch and not a piano, as the piano may not be in tune! Think of it this way, why would you tune a tunable instrument to another instrument that needs to be tuned?

Next, assuming that string 6 is in tune, play A = 110 Hz on string 6 fret five. This reference pitch should match string 5 fret zero. If string 5 fret zero, sounds the same as string 6 fret five, they’re in unison and your guitar is in tune. If they don’t match and sound the same, you’ll need to adjust string 5 higher or lower in pitch until they do. Be patient, this is Unison Tuning ~ and the more you practice it, the better you’ll get!

After string 5 is in tune, play D = 146.83 Hz on string 5 fret five. This should sound the same as string 4 fret zero. Again, if it doesn’t, you’ll need to adjust string 4 higher or lower to match the string 5 reference pitch.

Congratulations! Your guitar sounds so much better now that it’s in tune.

’til next time, keep playing and have fun… I’ll be listening!