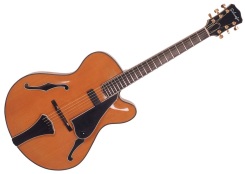 At a recent Homeschool Convention someone asked me: How many chords are there on the guitar? That’s a very good question, I replied. Is the answer, six, ten thousand, a million, who knows? What we do know is that there are only five simple open shapes from which all chords originate!

Now, imagine taking a pair of scissors and cutting this whole fretboard picture into five pieces, which we will call fractions. How hard would it be to put together a puzzle if it only had five pieces – Playskool® right? Well, the five puzzle pieces are the five open major chords: E, D, C, A, G which like an anagram can be rearranged into the word: CAGED. You probably know these five open shapes already.

Next, let’s see how these five shapes become movable forms on the holistic fretboard. Simply stated, the definition of holistic is forms interlocked. To see this holistic connection, we need to know that a chord contains at least three different letters that are played at the same time. For example, an F major chord is spelled with these three different letters: F A C. However, unlike English, these 3 letters may be arranged in any combination, for example: F A C, A C F, C F A, F C A and the chord will still be F major. These different letter orders are called inversions. In the following example, we’ll group the three F major chord letters vertically as we move up the fretboard, and like magic, the five F major chord forms appear!

Congratulations! You can now see all five F major chord forms on your holistic fretboard.

Now, here’s the important part, no one knows any more F major chords than you do… there are only five! And by simply moving these five major chord barre forms to a different letter location the fretboard, all major chords can easily be played – but that’s another lesson…

So, till next time, have some fun interlocking your five form holistic puzzle pieces ~ I’ll be listening . . .

This entry was posted on Thursday, May 22nd, 2014 at 1:51 pm and is filed under Guitar Theory. You can follow any responses to this entry through the RSS 2.0 feed. You can leave a response, or trackback from your own site.